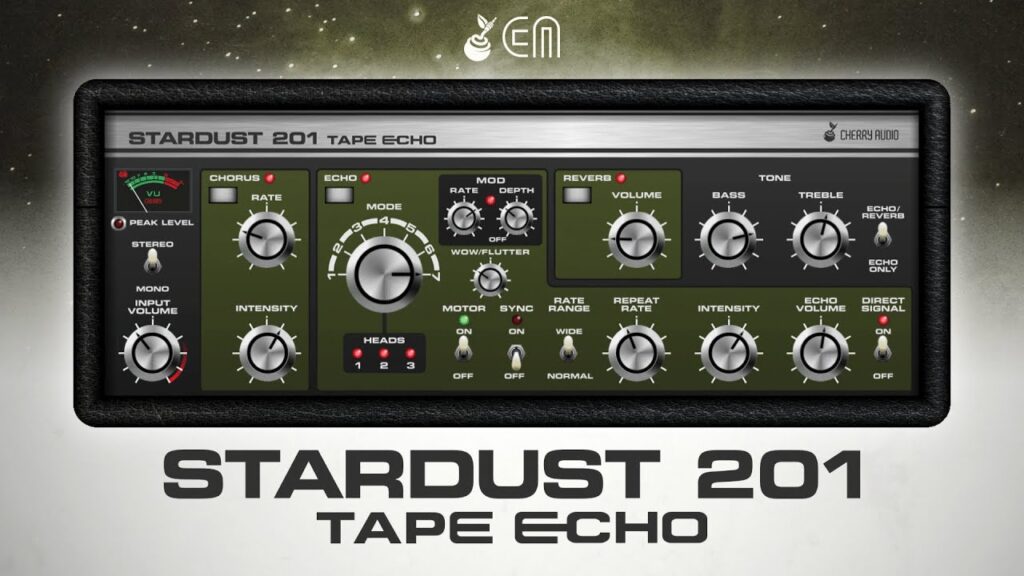 Stardust 201 Tape Echo is a hot-rodded interpretation of the classic Roland “Space Echo” tape echo effects of the 70s and 80s. Cherry Audio’s Stardust 201 Tape Echo combined the features from the original RE-201 and RE-301 Space Echo units, and they have added additional features like the highly prized BBD type chorus and mono/stereo compatibility so it’s unique in its own way and without the hassle to deal with the maintenance and tape loop replacement. However the global wet/dry knob is missing which was a bit disappointing. I hope they will add that feature in the near future.

A bit of the history lesson here on the history of “Space Echo”: Prior to the advent of solid-state devices, echo effects were created with tape machines by recording an incoming signal, then playing it back slightly later via a playback head situated after the record head. The length of the delay time was dependent upon the speed of tape transport. Additional echo repeats were achieved by mixing (i.e. feeding back) a portion of the delayed signal back into the signal input. This may sound like a somewhat crude affair, but it somewhat accidentally sounded fantastic for a number of reasons – the limited fidelity of audio tape provided a natural rolloff of bass and treble frequencies, and a “warm” tonality, and the inherent instability of the mechanical tape transport added (ideally) minor speed variances, lending an organic chorusing effect to repeats. Adding large amounts of feedback would overload the circuit and tape itself, resulting in wild, distorted “runaway” feedback effects.

The signal flow of Stardust 201 is pretty straightforward from left to right. Starting with the Input section > Chorus > Echo > Reverb. The GUI is very organized and clean mixed with the classic “Space Echo” color scheme, that is green & black.

Let’s start with the input section. There’s a simple VU meter that shows you the input of the signal, with the Input Volume switch that you can set to overdrive the signal. It adds a nice analog distortion when you push it hard without any digital clipping side effects. The mono/stereo toggle switch is the feature that makes this plugin stand out from the rest of the “Space Echo” emulation. It gives you a true stereo effect while some of the other ones I have used, were either only able to operate in mono only or partially stereo (delay in stereo but the reverb remains mono.) It sets the output signal for mono or stereo operation. This only affects wet signals – incoming dry signals will not be altered, that is, stereo signals won’t get mixed down to mono. Unlike an original Space Echo, which is mono only, Stardust 201’s chorus, echo, and reverb effects can operate in stereo.

Moving on to the Chorus section, it has an independent toggle switch to turn on and off the Chorus. This is the highly prized, warm and glorious BBD-type chorus featured in numerous classic Roland and Boss instruments and effects unit. BBD refers to the “bucket-brigade device,” analog chips introduced in the 70s. “Bucket-brigade” refers to the concept of extinguishing distant fires by transferring water via many, many buckets. I really like the tone running the signal through it, it gently rolls off the highs and lows, adding an extra lo-fi character, which is on top of the highly prized lush modulation that it provides. Setting Stardust 201’s Stereo/Mono toggle to the Mono position works as above – a single one-BBD effect, mixed with the dry signal in mono. When the Stereo/Mono toggle is in Stereo position, Stardust applies two independent (and phase-inverted) chorus effects for true stereo. I think I wish they have is the ability to switch this Chorus stereo/mono independently, which will gives us a bit more flexibility when dealing with mono signal, e.g. I want the chorus to be blending with the dry signal in mono while adding the reverb/delay in stereo for the width.

Next up is the “Echo” section. The controls are pretty self explanatory if you are a long time “Space Echo” user. And as good as how it looks, it does deliver the highly sought after “Space Echo” tone and delay. I love the independent on/off switch on the delay so I can engage or bypass it so I can use the chorus & reverb only with and without the delay module. Here’s a few unique features that I am quite fond of.

– Motor On/Off- This lets you shut off the virtual tape transport “motor.” This makes a really cool noise, particularly with long echo times and high Intensity knob settings. Because the tape gradually slows down and speeds up as the switch is moved, it’s easy to “play” – try assigning a MIDI/USB button.

– Repeat Rate- Sets the echo base time (see the Mode Selector table and Rate Range above for times). This control may seem “backwards,” because on a real tape echo, it sets the motor speed, thus lower settings = slower motor speed = longer delay.

– With that in mind, lower settings = slower motor speed, so the lower the knob setting, the longer the delay time. Note that the tooltip (the popup value display you see when turning a knob) always shows the delay time for head 1. To determine the exact delay times for heads 2 and 3, you can multiply the displayed time by the values shown in the table below.

Lastly, it’s the Reverb section. “Space Echo” has one of my favorite spring reverbs, however it was mostly in mono until now you can have it in true stereo thanks to StarDust 201. It’s very gritty and dark and that’s what we love about it, it adds such a signature footprint to the sound. But like I mentioned before, if there’s a way to add an independent stereo/mono switch to each module, that would be game changing and much more versatile in terms of how we can apply the echo/reverb/chorus independently. Hope they will do so in the future updates!

The comprehensive Midi compatibility really adds an additional functionality in terms of performing live or automating it with a midi controller. It’s much more user friendly and expands its audience base, to include musicians/DJs/producers/sound designers who perform on stage with it or at the studio that prefers a more organic and interactive way of using this. It wasn’t available anywhere else until now.

I think the StarDust 201 is easily the best “Space Echo” plugins out there right now with its functionality and sound quality. 10/10 for what it’s worth, and it just put a smile on my face wherever I put it, including my mix bus (don’t do that at home LOL).